A Series Of Firsts by Blair Schwartz

It’s been a while since I last posted an entry on Big Medicine, but that is the nature of the Internal Medicine Residency. A program designed to immerse you (quite literally at times) in the art and science of medical diagnosis and management, occasionally letting you up long enough to realize how bloody exhausted you are while at the same time acknowledging that there isn’t a single other gig in the universe you’d rather have. It really is odd that way.

As is to be expected, the first three months of residency have been punctuated by ups and downs and more than my fair share of first time experiences. To give you a bit of a perspective from the eyes of an R1 (or Intern in some areas) I’d like to relay a few of these to you.

My First Day: July 3rd, Overnight in the Emergency Department doing Internal Medicine Consults. I arrived 30 minutes early as is my nature, and spent a good 15 minutes making sure everything was in order. Took some time to get used to my new long white coat, with its different pocket layout. I was paired overnight with a 2nd year resident, a colleague that I knew from the same medical school.

The contrast could not have been more evident. I was dressed in my pristinely bleached, still having the creases from the package, white coat. His was a stained and crumpled coat testifying to having paid his dues in the trenches of medicine. We took sign out and as we were about to tackle the box full of our work for the night I asked him if he had any pointers. Without missing a beat “Take your time on each case, have fun, and try not to kill anyone on your first night……. Oh and if you need me, I’ve got my pager”.

With that trite and yet totally reassuring pep talk under my belt I set forth into my night of firsts.

My first prescription was for an Insulin sliding scale. Perhaps fitting since as a kid I was fascinated early on by the discovery of Insulin. It was likely a combination of being proud of a Canadian discovery that saved countless lives and the fact that a seemingly crazy idea of taking extracts from a dog and giving it to a human being actually worked.

I moved on quickly to tackle my first case: Hypercalcemia; incidentally found in someone who came in for a cough. Hypercalcemia had always been my favorite electrolyte disturbance as a medical student (I’m an internist, give me some slack here), largely for the sheer elegance of its diagnostic workup and the relative ease with which it is managed. So I jumped into this case head first, requested the workup and in the end ended up with hyperparathyroidism, my first diagnosis.

The next day would be the shift with my first procedure. For most residents it consists of an IV insertion, Arterial Blood Gas or putting in a Foley.

Not me.
No Sir… My attending comes and tells me that we have a patient with a pleural effusion who needs to be tapped and that I should go prepare all the equipment. As I am gathering my supplies, preparing to stick a 14 Gauge Cathlon into a man’s chest I begin to wonder what the hell I am doing here.

Three days ago I was a medical student who would have never been asked to do this. What exactly happens at midnight on July 1st every year that we are all of a sudden competent and independent medical providers?

I spent longer than usual searching for that vacutainer as I reviewed the steps in my head. I had read about thoracentesis several times, I knew its indications, steps, and contraindications cold. I’d even seen two of them, which immediately conjured up chills as I thought of the See One, Do One, Teach One mantra our school employs. I’d also essentially done a nearly similar procedure before on the street as a treatment for a suspected tension pneumo, but this was different.

On the road you stick a needle in the chest of an acutely ill patient with the intention that if you don’t, they will die. Here I have a relatively well, stable guy who just needs some fluid taken off so we can make a diagnosis, slightly different stakes.

As I prepared my patient for the procedure I explained to him what I’ll be doing and the most amazing part for me is that he didn’t ask that question that EVERY R1 dreads: “You’ve done this before, right?”. As I continued with my longer than normal disinfection of the skin my attending gave me that look as if to say “Blair, Less stalling and more sticking of large bore needle into chest”.

Without delay I froze the skin and gently nudged my catheter into his pleural space. Perspiration had collated my mask to my face and my heartbeat remained in the nice maximal range until I saw that flash of amber coloured liquid in my syringe.

I believe at that very instant several people in attendance took a collective sigh of relief. I plugged the vacutainer and proceeded to take off about a litre of fluid. I explained that he might cough towards the end, a common event as the lung begins to re-expand.

As I passed on this golden tidbit he coughed rather violently and thrust back into my drainage apparatus. The fluid quickly changed from amber to grossly red. I muttered a few choice words that were about parallel with my breath, then removed the setup and applied pressure. My attending thought it was pleural irritation or a small vessel. I spent the rest of the day thinking I’d perforated his pulmonary artery or some part of his heart. All that night, as I couldn’t sleep, I dreaded coming in the next day to hear that he had gone to the ICU, the OR or worse yet the Eternal Care Unit as a result of my procedure.

At that time it became readily clear to me just how easily a physician can harm his patient, how I can take a relatively healthy person and quickly change their status. The patient did just fine, it was likely what my attending thought, but still that was a stat dose of humility and for the first time Primum Non Nocere was more than an easy way to sound smart by speaking Latin.

My first continuity of care took place about a month into residency. I was on the ward and was surprised to see a familiar face admitted onto our service. The patient I had seen bleeding in her washroom in my last column had survived to admission on the medical service. Proving once again, that when it comes to an individual patient the only statistic that matters is 50:50, it’ll happen or it won’t.

She was in a palliative stage of her liver disease, entering into and out of delirium as is so typical of hepatic encephalopathy. I had several discussions with her husband who was at her bedside, nearly round the clock. We talked about the course of her disease, how it was affecting him and what we could offer to take care of both his wife and his needs. For the first time I could say that I really had my own patient.

As a medic I worked in that snapshot of acute care; assess and stabilize, do the best I could to make that brief time with them as comfortable as possible. I always regretted not being able to have a certain degree of follow up. Sure you’d occasionally hear about the big cases, the cardiac arrest you brought back or that stabbing to the neck who you kept alive by tamponading their neck vessels with your gloved hand, but you never knew the rest.

Now I get to see and follow disease, get a real sense of what my interventions are doing and also support my patients and their family for more than 30 minutes. One Saturday morning that I was on call she didn’t wake up. I declared her, did the paperwork and called the husband. Continuity of care means dealing with all elements of the cycle.

Thus far there have been many similar moments to those I related to you above. Some nights are easier than others, some cases more straightforward and others that we never really do get a handle on. I’ve had the pleasure of working with health care providers from all backgrounds and levels, with different methods of training and approaches to patient care. Yet in spite of all this diversity, from the newest first-aider to the most grizzled veteran medic, from the newest nurse or greenest resident to the nurse who remembers the chief of surgery as a resident, there is one common theme amongst them. That unflinching desire to render assistance in whatever capacity possible to their fellow man.

There is one experience as a resident that proved this fact beyond a shadow of a doubt, my first Code Orange.

I was on the pulmonary service that day, hunkering in the ER’s isolation room reviewing my third rule-out TB consultation of the morning with the attending. Bedecked in our gowns, gloves and N95 masks my EMS pager buzzed with a message from a colleague watching TV that there had been a shooting at Dawson College. As we exited the negative pressure room and removed those infernal masks the code orange was called, preparing our hospital for an external disaster.

Within minutes the whole hospital came to life. The ER was cleared of any patient who could tolerate the move and the emergency cart was wheeled up with all the additional supplies one could possibly have to use. There was an influx of nurses, pharmacists, unit agents, technicians and physicians of all varieties… some who came in early for a shift or just on their own accord, after hearing the news. Others quickly closed in the OR or interrupted rounds in the ICU to be ready to lend a hand. Amidst the countless bodies in the ER patiently waiting for the influx of patients, people were not wondering how this could happen, nor musing as to how many shooters there were or what video game they played. Each and every person was uniquely focused on making sure that the patients who would come in that door would get the best care our hospital could offer.

Throughout this crisis I stood in the nursing station and watched. Far enough away not to interrupt, but close enough to lend a hand if asked. At a colleague’s request and a throwback to my dispatching days, I kept my eye on the phone from the ambulance service that would announce incoming patients. Mostly though, I watched what was truly an unforgettable sight. We ended up getting 2 non-critical patients, each of whom was likely seen by 10 specialists within the first 5 minutes (take THAT golden hour).

Despite the paucity of patients that day, I can honestly say that amidst one of the darkest hours of my fine city’s history I was able to find one of my proudest moments as a member of the healthcare community.

To all those who answer the call: Cheers and Good on ya!

A nugget of Big Medicine for your consideration from the late David AH Newman. #93 To be a first responder My late […] 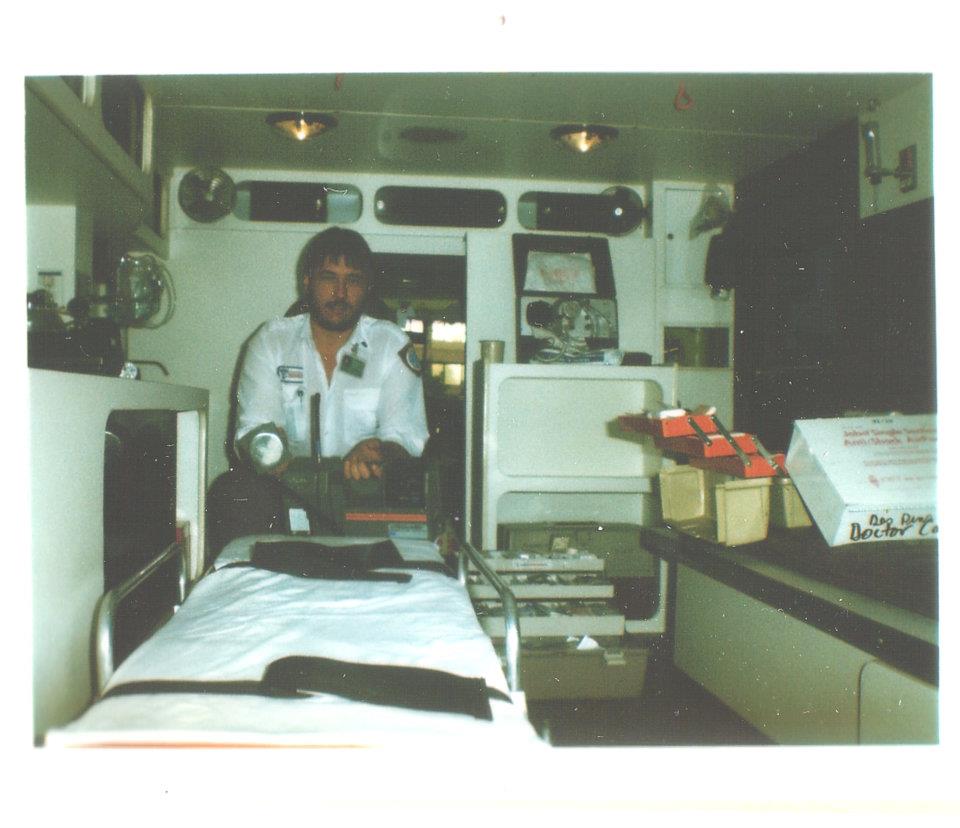